The 2018 IGCC combines or unifies ASHRAE's Standard 189.1 with the existing IGCC, a significant shift that will help further standardize and simply construction codes for government entities and the building industry.  Additionally, the code is more aligned with USGBC's LEED green building certification, which will likely facilitate IGCC adoption and LEED credential achievement for a win-win that also benefits the environment.

Below are some of the major changes in the 2018 IGCC:

According to Dr. Andrew Persily of the National Insitutute of Standards technology (NIST) and formerly of ASHRAE, “Most of the changes are incremental.  Ideally, now that there is one document instead of two, it will reduce confusion and increase adoption.”

As mentioned, this version of IGCC more closely aligns with the LEED green building certification. This is due to the existence of many other sustainability requirements, some of which have already been mandated by certain jurisdictions. Being able to closely resemble one of those required codes, LEED, is believed to have increased adoption rate of IGCC. 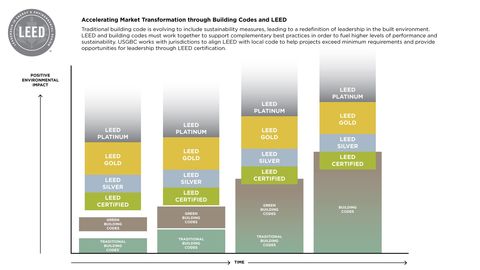 The chart above demonstrates USGBC’s vision of the future of building codes, that they should become the foundation of LEED. In fact, IGCC, after the change, is serving as somewhat a prerequisite for LEED verification. Being compliant with IGCC can directly contribute to gaining 20 credits in the LEED rating system.

One obvious beneficiary of this coalition of several well-known green organizations and standards is ASHRAE. For ASHRAE, “189 is basically at the center of the green-standard world.” However, the spokesperson also recognizes that “It becomes a partnership. Now we’re not the sole control like we have been in the past—but that’s OK. These are the recognized leaders in this world, and the fact that we’re all coming together is very exciting.”

A greater goal of this coalition is to enhance the number of jurisdictions that mandate green building related codes by making the adoption and selection process easier. Owens, the SVP of USGBC, expresses the need for a hammer (regulation). “Progressive jurisdictions across the United States were rummaging through their toolbox for a hammer (a regulation) and only found a screwdriver (a rating system),” he writes in a blog post explaining the partnership (http://www.usgbc.org/articles/standard-1891-igcc-leed-phillips-head-hammer). “You can hammer in nails with a screwdriver…but it’s hugely inefficient and, when you have a bunch of nails to drive, frustrating as hell.”