What Homeowners Should Know Before Going Solar 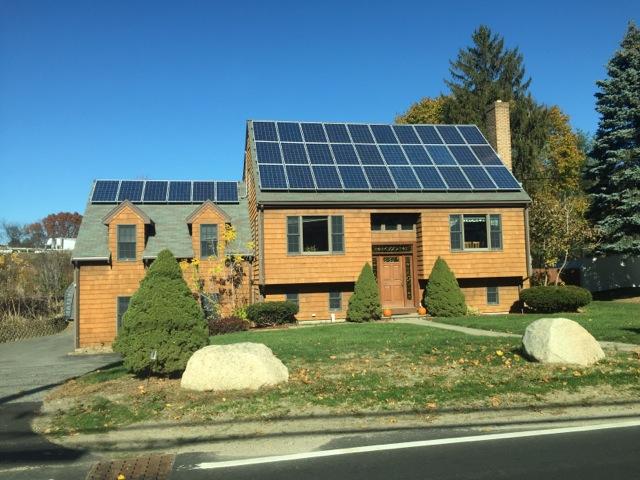 Solar has become very popular over the past couple of years for a few reasons. First , the price of solar has come down significantly. The second reason is that people are becoming more concerned about the environmental impact fossil fuels arehaving on our eco system, making renewables like solar more appealing. From banks warming up to the solar’s reliability, to the falling price, financing for solar has become more easily accessible.

First, Let’s Look at the Incentives
At a federal level, there is a 30% tax credit off the cost of the finished solar system. What this means is a $30,000 system will net you $9,000 in tax credits which can be carried five years forward and two years back. This is not a tax write off – this is a dollar for dollar credit off your federal tax bill. This is beneficial to those with a large tax appetite although you will not get reimbursed for the credit you do not use. Meaning if you only have a tax liability of $7,000 over the course of the credit, there will be $2,000 on the table that you will not be able to benefit you. This should not be a deal breaker, however, as you will not have a tax bill for five years and will still have saved money off of your system. We will get back to this later.


Depending on where you live, there are also tax credits available at the state level. For instance, there was a 15% tax credit in Massachusetts, although this is now reservedonly for solar thermal.  There are also rebates available, depending on which state you live. The catch is that these rebates tend to go quickly, so it is difficult to factor these into your decision of whether or not to go solar.

The Green Value of Solar
Most states have different incentive programs in order to entice a portion of their energy grid to come from renewable energy. You may have heard the terms ‘SRECs’ ‘ZRECs’ ‘Green Tags’ ‘RECs’ or ‘Feed in Tariffs’. In the simplest explanation, these incentivesrepresent the premium utilities pay for green energy.
The Feed in Tariff is a popular performance based incentive used in Europe, Canada, and a couple of states. It  is a fixed rate over the course of 10-20 years. SRECs are used in about twelve different states and they are a performance based incentives which pays a rate that fluctuates with the energy market. You will receive an SREC for every 1,000 kilowatt-hours of electricity you create from solar – about  six to eight SRECS are created annually for your average sized (6 Kw) solar system.

What does this mean, you ask? Most utilities are required by law to generate a certain amount of their electricity from green energy. If not, they pay a steep fine. So what do they do? They buy your SRECs. In states like Massachusetts and New Jersey, they can be worth more than the electricity your solar system produces.

Now, Let’s Look at Your Options
There are three different options for going solar. The first option is to purchase the system. The second option is to lease the panels, often referred to as a Power Purchase Agreement (PPA). The third choice is to buy into a community solar farm. All three of these types of solar are beneficial to you, as you will save money on your utility bills over the life of the solar system.  However, you need to look at the benefits and drawbacks of each in order to find out which works best for you.

Owning
Owning the system has always been the way to go solar. Once upon a time, solar was prohibitively expensive for practical use. In fact, the first use of solar for nonmilitary use was used in marine applications - to charge batteries for emergency backup communication systems. As prices came down and more systems have been deployed, banks warmed up to the aspect of financing them. This meant that you no longer need to have tens of thousands of dollars at your disposal.

Pros – By owning the system, you benefit from all the rights and privileges of the system. Meaning, you benefit from the tax credits, a significantlyreduced electric bill, plus the cash flow from selling off the SRECs. Most solar systems pay for themselves in about five years. After that, you will get electricity for pretty much free, plus you make money from SRECs for the first ten years you own the system.By having a solar system on your house, your home value increases if you plan to sell your house down the road. Homeowners in many states also get property tax abatements for the price of their systems, which can help when it comes time to paying property taxes.

Cons – Although solar has come down in price, it is still considerably expensive. Some banks will provide 100% financing, but many do not and you may be expected to put around 10-20% down. Besides the cost of the system, you may not be able to monetize the whole tax credit. Think of first time home buyers who will not have a tax appetite for a few years because of tax credits for buying a home and potentially significant write-offs from interest payments on their mortgage for the first few years. Retired homeowners may not qualify for the tax credits either, as they no longer have interest to write off and they may not be paying federal income taxes. Although most systems are pretty reliable, that is not to say you may be on the hook for a repair or two down the line.

Owning a system is ideal for someone who has a tax appetite and plans on staying in their home for at least five more years. Five years in order to recoup the cost of the installation. From a financial perspective, owning solar gives you the most bang for your buck of the three options.  However, for people who are not particularly receptive to the cost of their electric bills, there can be other things they would rather do with that down payment money and may be better off with a lease.

Leasing
Power Purchase Agreements (PPAs) have been around for decades. Investors with a big tax appetite and an ability to make a major investmentwould install solar arrays on a building and a business would agree to buy the power generated by the solar array. The business gets their electricity for below market rate, while the investor gets the tax credits, SRECs, and a pretty good return on their investment. Residential PPAs began in the mid-2000s, and they areverysimilar to the PPAs reserved for business or government applications. The difference is that the residential PPAs get securitized, or bundled up in bonds for investors to buy. Leasing has become very popular and you can tell the company is offering a lease when they say “20% off your electric bill” or “No money down for solar”. This is because the homeowner does not buy the panels – they are only agreeing to buy the energy the panels create.

Pros – By leasing the panels, you will not have to spend any money out of pocket for solar and you will still on average get a decent savings on your electric bill. Because the price is fixed, with a slight increase over the course of the lease, you will be protected by rate spikes. Also, since it is technically not your system, you will not be responsible for any repairs, should something break.

Cons – You may not be paying anything out of pocket, but you sign a PPA agreeing to buy the power for 20 years as well as forfeit the incentives and tax credits.Another pitfall of leasing solar is that it can make it difficult to sell your house. It is true that having solar will give prospective home buyers value by having smaller electric bills. However, the panels do not add value to the home if they do not belong to the homeowner, technically. Further, people who are interested in buying a house that has a solar lease on it may use it as a bargaining chip to lower the asking price.
Leasing solar is ideal for someone who is more interested in the green aspect of solar than the investment aspect, is not receptive to the price of their electric bill, and do not want to bother with the down payment or maintenance.

Community Solar
Community solar is relatively new to the market. It is simple and pretty straight forward. You basically own a share of a solar farm. You may have been seeing a lot of solar farms popping up seemingly everywhere. Many of these solar farms are set aside for community solar. Community solar is becoming popular benefits consumers who do not have a good roof for solar and even people who are usually left out of the solar equation – renters.

Pros – Because the solar is produced off site and the credits are applied to your bill, you are able to reap the benefits of solar without using your roof or your landlord’s roof. Do you move frequently? The credits can be applied to your new place as long as you have the same utility provider. Even better, solar farms are less risk from a financing perspective, so they do not require as high of a credit score and the terms can be shorter than a traditional 20 year lease. Community solar also does not require money out of pocket.

Cons–Much like signing a lease, you forfeit all the incentives over to the financer. You are always going to be leasing with a community solar share, as owning a share would be considered a security, making all kinds of red tape that would inhibit developers from even entertaining the thought of creating community solar in the first place. Although the terms are shorter, so are the savings that you can expect off of your electric bill. If you move outside of your utility provider’s territory, you may be on the hook for fees in order to get out of the contract.

I am a sales rep for Associated Energy Developers, located in Plymouth, MA. We specialize in commercial solar and wind projects both locally and internationally.