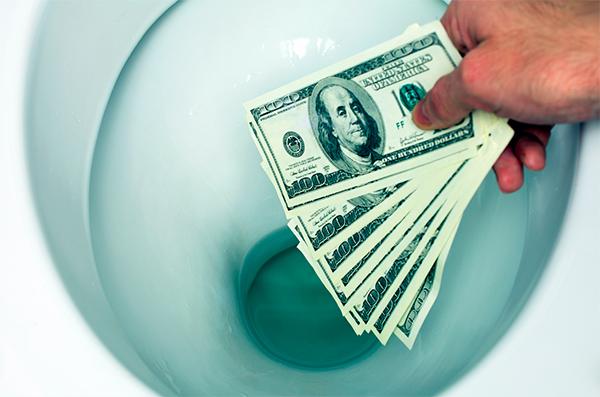 Wasted Water and your NOI is Going Down the Drain!
Water conservation is good for the environment and your bottom line.

Increasingly, builders, developers and planners have embraced the movement to integrate sustainability and conservation in both new and existing multi-unit commercial properties, which include apartment buildings, student and senior housing, hotel and lodging. Water conservation strategies are a critical component of these efforts to build and operate more sustainably, as reduced consumption delivers multiple wins for owners and operators, occupants and the environment. ROI is a key water conservation driver, as saving water means saving money and energy. Lower water consumption also means reduced environmental impact, and often more satisfied occupants and community members, and even higher property values. Importantly for this growing green and healthy building movement, water conservation shows that “Going Green” can be cost effective, not to mention profitable.

Why does water conversation matter?

Drought is an ongoing concern in several states and there are even governmental mandates to reduce water usage. However, even in states where drought isn’t an issue, water usage still commands a significant portion of utility costs, and nationwide, water costs are rising approximately 7–8% a year.

Compared to sinks and showers, toilets account for the highest water usage and subsequent waste among fixtures. Low-flush toilets are often installed to address this issue. But is the problem solved? Not by a long-shot.

This is not to bash low-flush toilets which do reduce the volume of waterflow, but mechanical failure of toilets is the main culprit which leads to leaks and accounts for 17% of water usage in hospitality, 54% in multi-unit apartments and 58% in student housing! A small toilet leak can waste up to 250 gallons of water per day; an open flapper can waste up to 5000 gallons per day.

What do leaking toilets cost?*

*Based on $.025/gallon – estimates based on current client data

Looking at the numbers, you can easily see where a significant portion of your NOI is going—down the drain!

Some owners and developers get offended by those statistics. “Not my toilets! We only install quality appliances!” Truth be told that despite the quality of a toilet, the simple mechanics of toilet parts like the rubber flapper inevitably break down and cause leaks.

The answer appears simple: replace the bad parts and fix the leaks. However, the vast majority of leaks go undetected. Unless your maintenance staff is performing regular maintenance checks, a leak could go on for a very long time—and that wasted water is lost revenue.

Another significant contributor to water waste and the number one insurance claim is flooding. The average flood claim ranges from $20,000 to $60,000 per claim—and it’s not uncommon for a flood to cause millions of dollars in damage.

This information is certainly a wake-up call that water conservation is not only important for the environment and our communities—but also for your bottom line. So where to begin?

Several toilet sensors are available in the marketplace but are mainly geared for consumer use. Some lower-end products are battery-powered and rely on user awareness and interaction. For the disciplined do-it-yourselfer, those products provide a simple and inexpensive means of monitoring. However, residential solutions do not scale well and are impractical for commercial use. An alternative is a higher-end mechanical solution—but the “mechanical” components will eventually break down. Leaks and floods will still go unnoticed.

One more extreme technical solution for commercial use is the auto shut-off valve. When a leak is detected, the valve shuts off entirely. The problem with those is that one small leak could shut down the entire flow of water into a building or a large portion of it. Not an ideal situation with multiple tenants, guests or employees.

Regarding flooding, there are several devices on the market but again, these are primarily geared toward consumers and interface via WiFi/smart phone app. For commercial use, a more robust system is needed that identifies leaks and reports them in real-time. WiFi systems are unreliable and not designed to handle the volume of monitoring and reported needed for large commercial properties.

The good news is that there are cost-effective ways to reduce water waste and eliminate flood claims entirely. Through today’s technology, there exists the ability to monitor toilet water waste and flooding in real-time to report issues before they become catastrophic events. IoT (Internet of Things) devices with monitoring are proving to be the most reliable and effective. Why? IoT devices use low-frequency transmitters to send information to the cloud where it is then disseminated to the respective parties. The battery life of these devices is normally several years and they function 24/7 so they’re highly practical and functional. IoT also allows for better scaling and reliability compared to WiFi alone which is extremely important when your buildings span a sizable area.

By effectively monitoring toilet water waste alone, you could reduce your water utility costs by over 20%, while increasing net operating income and equity value. Flooding can’t be avoided entirely, but early detection can prevent catastrophic flood events and all its associated costs, including displacement of tenants/occupants, remediation and increased insurance premiums.

Utilizing our toilet sensors, we have several case studies (see one below) that show a significant and immediate reduction in water waste, increased net operating income and equity value, and swift ROI.

Note that in the second year, the only reoccurring cost is the MaaS (Monitoring as a Service), increasing the ROI dramatically.

Our flood sensors can be customized to your specific monitoring needs. We have fully submersible sensors for pump rooms and other high-flow volume areas. Our drywall sensors can detect leaks on the inside or outside of walls. Our rope sensors can wrap around pipes or under carpets to monitor a wider area. If the water is there, our sensors will detect it!

Using Sensor Industry flood sensors, our clients have eliminated flood claims by 100%! See the testimonial below.

“We are thrilled with Sensor Industries sensor system. In the past we had on average a flood per month that would require repairs. Some of these floods were severe that resulted in millions of dollars in damages that would have been minimized had we had the system earlier. We have not had a serious flood, or even a minor one, since we installed the system.  I would be happy to discuss your system with any prospective client that you may have.”

Knowledge is power and I hope this information compels you to take next steps to conserve water and subsequently increase your net operating income. We welcome any questions you may have as well as the opportunity to discuss your specific properties.

I'm proud to work as the marketing director for Sensor Industries, a company that utilizes IoT technology to monitor and report water leaks and flooding in multiunit commercial buildings: apartments, hotels, student and senior housing. Our MaaS (monitoring as a service) increases net operating income and equity value while conserving water and energy.