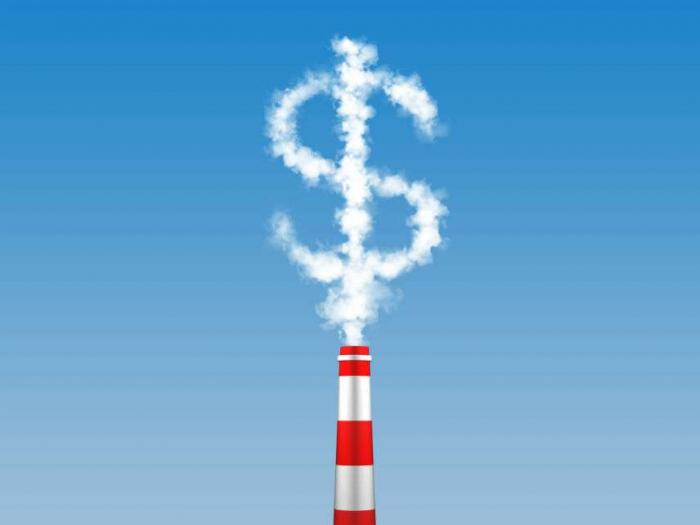 As we seek to find ways to transform our carbon based economy into a sustainable one, the idea of a carbon tax is gaining traction.  A carbon tax aims to decrease the production, distribution or use of coal, oil and gas, by means of a government fee which acts as a deterrent to lessen their use.

Sometimes known as putting a price on carbon, it is seen as a modern day strategy to combat climate change by taxing the emissions from burning fossil fuels. Generating carbon based energy and the consequent emissions are known contributors to the greenhouse effect, so the carbon tax is based on how much carbon is emitted by their combustion.  These emissions result in a pattern of extreme weather events on both a local and global scale and the effects are known as climate change.

However, the concept of a carbon tax was actually created over a hundred years ago by British economist Arthur Pigou in 1912, who formulated the idea that market activities with harmful societal effects or externalities, should be taxed proportionately to the harm caused.

In Pigou’s day, this was air pollution, the result of coal burning in factories and homes, and the cause of the famous “London fog” of the early 20th century. Not only was it a public health crisis, the thick oily fog killed livestock animals and ruined homes, furniture and clothes - all costs borne by the general population rather than the factories burning the coal. A Pigouvian tax would attempt to place a monetary value on the social cost as well as provide an incentive for the market to eventually move away from these activities.

How does it work?

Under a carbon tax, the government sets a price that manufacturers or emitters must pay for each ton of greenhouse gas emissions they emit as they burn fossil fuels, during the production process. The tax can be levied at any point in the energy supply chain but the simplest is to levy the tax ‘upstream’ or closest to the point of initial use of the fossil fuels such as, suppliers of coal, natural gas processing facilities, and oil refineries. Alternatively, the tax could be levied ‘midstream’ at electric utilities companies or ‘downstream’, at energy-using industries, households, or vehicles.

Proponents of a carbon tax such as climate lobbies, progressive lawmakers and other environmental policy advocates argue that this country’s emissions are greater than those of many developing countries.  Their position is that the United States, as a highly developed nation, has a responsibility to be a leader by example in this arena and should be an early adopter of a carbon tax program. In addition, they have stated that it may help to open a space in the market for clean energy or green technology in general.

Critics of a carbon tax, be they lobbyists for manufacturing industries, conservative groups and other deregulators have countered that such a wide ranging tax would impact a nation’s domestic economy, as well as hinder its ability to stay competitive on the global stage.  While an understandable concern, countries such as Canada and the E.U. have implemented a form of carbon pricing and there is no evidence of economic harm. Opponents of the carbon tax have also contended that other nations have currently surpassed the U.S. in terms of emissions so we are not the worst offenders and should not have to be subject to a program such as this.

Support on both sides of the aisle would increase the likelihood of passage of a carbon tax through Congress and enhance the policy’s staying power (making it less vulnerable to repeal by incoming administrations with new majorities).  For a carbon tax to be implemented successfully, overcoming internal divisions within the legislature would be the first priority, especially since the two political ideologies in the U.S. have differing views on taxes and regulations.

The ability to measure the financial damage of climate change has improved significantly in recent years, and current projections for 2080 to 2099 indicate that the hardest hit areas of the country will be in the South, many of which are traditionally red states. This information may mean that Republicans will have an incentive to come to the table to discuss the merits and demerits of such a move, in order to protect their constituencies from the ravages of climate change.

Opening the way for green tech

A carbon tax makes fossil fuels like oil and coal more expensive. This market-based approach, in turn, leads consumers and industries to use less and boosts demand for alternative energy sources like wind and solar powered electricity.

Starting with a thoughtfully designed low carbon tax and gradual structured raises can allow companies to focus on optimizing investments so they thrive in a carbon-constrained world. For example, last year the Climate Leadership Council (CLC) proposed a $40 per ton carbon tax. This would have little impact initially, only raising gasoline prices by about $0.40 a gallon. Natural gas prices would rise by a little over $2 per thousand cubic feet and coal prices would more than double. This means a carbon tax will have its most immediate impact by cutting our coal consumption dramatically and our natural gas consumption significantly. Households would cut their natural gas consumption by adding more insulation to their homes and gradually replacing their furnaces with higher efficiency furnaces.  Meanwhile, more electricity would be produced from renewable sources than from natural gas. As the carbon tax rate rises over time, transportation will gradually decarbonize, most likely through increased electrification of our cars and trucks.

There is the strong likelihood that green technology will receive a well deserved boost if it can come in under the price of conventional fossil fuel based energy. However, while a carbon tax will increase the price of fossil fuels, that is only half the battle. A complimentary policy to lower the price of renewable energy would encourage technological innovation needed in the green sector to transform our energy system. This could take the form of rebates to customers and incentives for producers.

Both the above measures, a carbon tax and a simultaneous decrease in the price of green technology would be easier to implement than a cap and trade system.  While a carbon tax directly establishes a price on greenhouse gas emissions so companies are charged a dollar amount for every ton of emissions they produce, a cap-and-trade program issues a set number of emissions allowances each year (the cap) and companies that have left over allowances can sell them to others who have used up their allowances (the trade). Also known as an emissions trading system, a cap and trade would require a restructuring of the energy marketplace.

If there are concerns about how consumers may be adversely affected by a carbon tax, they can be assuaged by a carbon dividend making the carbon tax reform revenue-neutral. This means returning the collected carbon fees minus the administrative costs to households as a monthly or yearly dividend.  In other words, the revenue raised should be given back through lower taxes or cash rebates rather than spent on new programs. This avoids conflating climate policy with debates over whether it is ‘big government’ or ‘small government.’

These dividends could be a way to combine carbon taxes with the goal of building an economy that is more equitable and sustainable.  In fact, most American households might receive more in dividends than what they pay in higher prices for carbon based products. It would allow households to make independent choices about their energy usage, encourage innovation, and build demand for low-carbon products at the consumer level. Research shows that the above ‘carbon fee and dividend’ system will reduce CO2 emissions and create an economic stimulus that will add jobs to the economy.

In addition, border carbon adjustments can also be used, which consist of fees imposed on any product imported from a country without a carbon pricing plan. Any border tax will probably have to be based on an estimate of how much carbon was used to create each product. For instance, the European Union plans to implement a carbon border adjustment mechanism which would look like a levy on imports and rebate on exports. The primary benefit of a border adjusted carbon tax is that it levels the playing field between domestic and foreign manufacturers and reduces the chances of companies shifting their production to other countries with lower carbon emission pricing policies.

As a nation, we have tried several approaches but have, so far, not succeeded in making the reductions that we would like to see.  As a reminder that the time for a carbon tax may be here, it is noteworthy to remember Winston Churchill who said, "you can always count on Americans to do the right thing - when they've tried everything else."

To get a better understanding of the topic, Rate It Green sat down with economist Dr. Gilbert Metcalf, Professor of Economics and the John DiBiaggio Professor of Citizenship and Public Service at Tufts.  We discussed carbon taxes, the Green New Deal, the role of the EPA, the COVID-19 pandemic, border carbon adjustments, and bringing others to the table on climate change.

In his new book Paying for Pollution: Why a Carbon Tax Is Good for America (Oxford University Press), Metcalf details a road to a workable carbon taxation program. During 2011 and 2012, he served as the Deputy Assistant Secretary for Environment and Energy at the U.S. Department of Treasury. He has frequently testified before Congress, served on expert panels including a National Academies of Sciences panel on energy externalities, and served as a consultant to various organizations. His current research focuses on policy evaluation and design in the area of energy and climate change and he has published extensively on energy and tax policy.