Despite its space-age name, building electrification is a relatively simple, yet potentially significant initiative. Instead of using the combustion of fossil fuels to operate buildings, it is now technologically feasible to use electricity from the grid.

For the most part, buildings use fossil fuels for the purpose of heating and cooling--although gas stovetops, water heaters and other appliances that employ on-site combustion make an impact on a building’s energy profile. For practicality’s sake, this article will focus mainly on the electrification of building heating and cooling systems; whether it be by way of a heat pump, large-scale space heating technology or otherwise.

Why Does This Matter?

Seventy million American homes and businesses burn natural gas, oil, or propane on-site to heat their space and water, generating 560 million tons of carbon dioxide each year—one-tenth of total US emissions. The current and future impact of building electrification promises to be significant, and can be broken down into a few basic components; here, we highlight technology, efficiency, and implementation.

The technologies used in electric heating are often misunderstood: electric heating brings to mind a clunky space-heater, or an electric blanket. In fact, in the past, electric heating was only feasible in relatively warm climates; baseboard heating, along with resistance heating in general, is an example of early electric heating that received a bad reputation for its inefficiency in years past.

The modern face of electric heating, however, is much more sleek. Stanford University’s campus provides a good example, detailed in this Environment America piece:

In Stanford’s system, cold and hot water circulate through pipes around the campus to meet cooling and heating needs. As it travels around campus and through buildings, the cold water is heated. At a central facility, heat recovery chillers transfer the excess heat from the cold water to the hot water — thus cooling the cold water and heating the hot water to the appropriate temperatures, a process that meets 80 percent of the campus’ heating needs. These heat recovery chillers are twice as efficient as natural gas heating systems, which leads to significant cost savings — $420 million over 35 years for Stanford’s system. 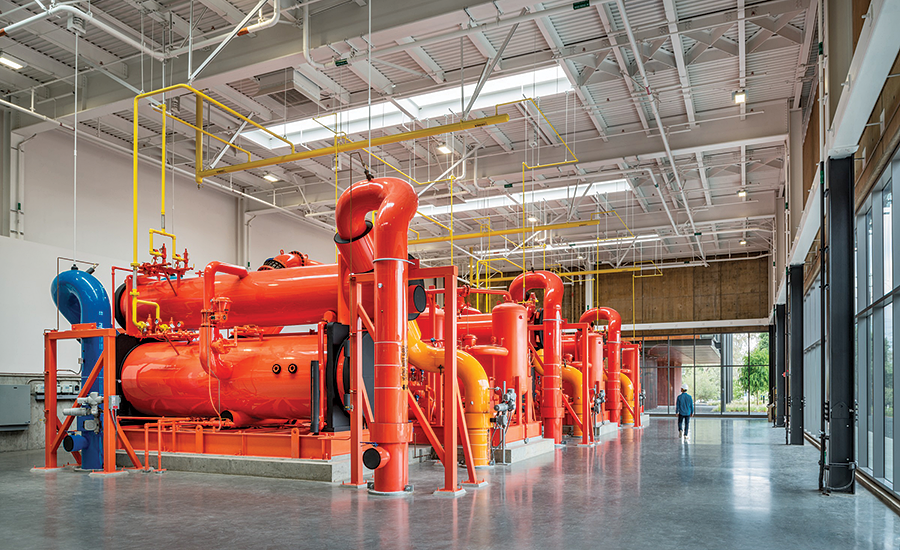 This is an example of a large-scale electrification project, which has important implications for the electrification of large swathes of city space. However, electric heating is available for homes as well: The Department of Energy details the use of “heat pumps” here: 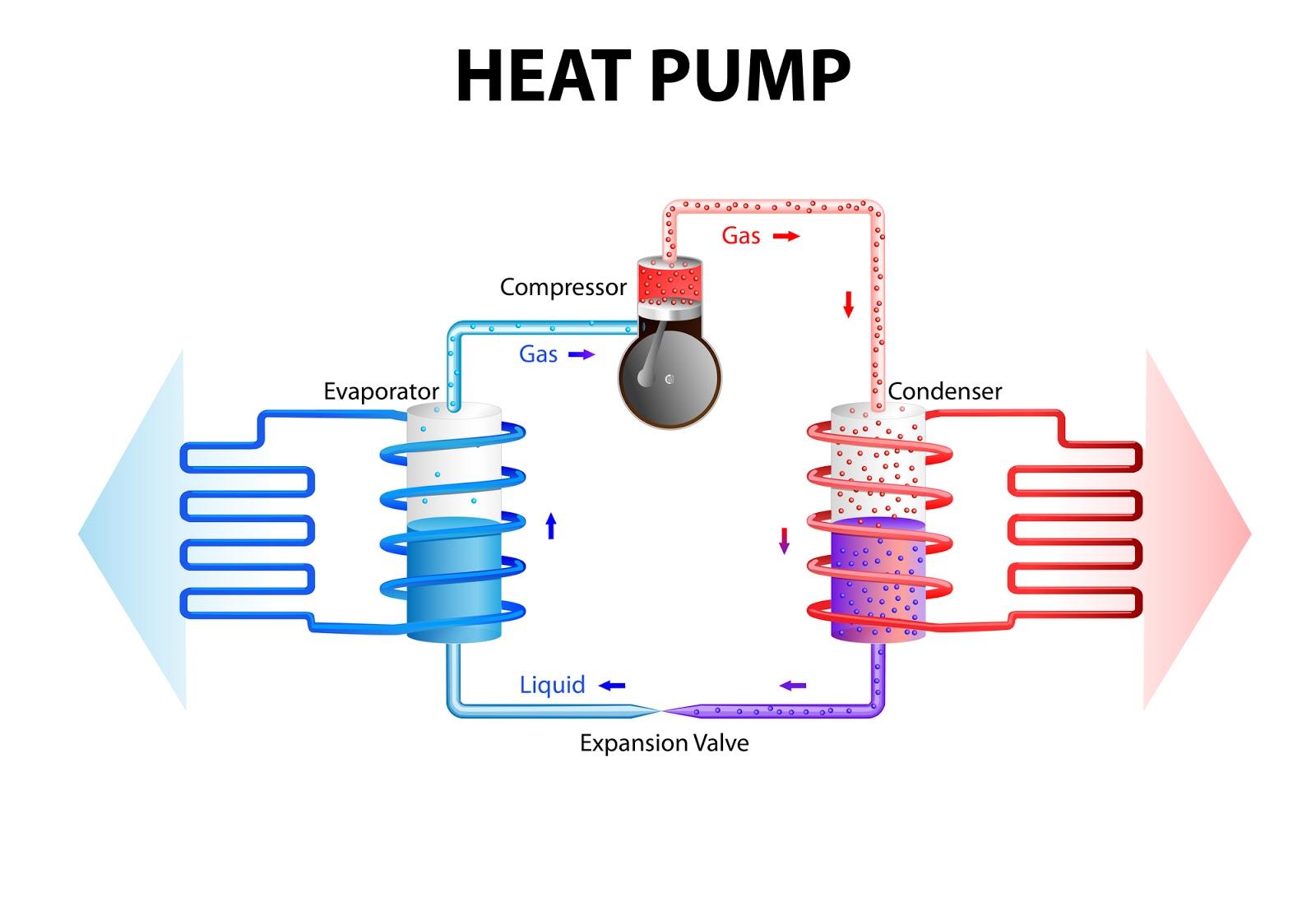 Previously not a viable technology for those in truly cold or hot places, heat pump technology has seen sufficient improvement to make it worthwhile. This is a major theme for electric heating and cooling technology; it’s only gaining more value with time and progress. Moreover, building electrification is safer and healthier on the consumer end; electric heating technologies are inherently cleaner than antiquated combustion-based heating methods, such as gas burners (which burn gas inside the home when in use, either to heat a boiler or air in a furnace). Because it relies on electricity from the grid, electric heating does not require fossil fuels to be burnt within the home.

Burning gas inside the home carries health implications that are acknowledged by proponents and critics alike: This report from the Ohio Public Health Commission calls natural gas a clean fuel course, yet maintains that gas by-products in the home are potentially deadly:

The chemical properties of natural gas make it a clean fuel source. However, those same properties make it potentially dangerous for consumers if their natural gas appliances are not properly maintained. One of the dangers of poorly maintained or improperly used appliances is carbon monoxide poisoning. If a faulty furnace does not burn natural gas properly, or is not vented properly, carbon monoxide can begin to build in the home.

Beyond worries about small-scale gas leaks, there have been more sensational stories in the news recently; in 2018, gas leaks in northern Massachusetts caused multiple houses to catch fire and explode. The New York Times reports that this led to an $80 million dollar settlement, and an in-depth examination of the affected towns’ former natural gas systems. Investigators reported a lack of professional oversight in the gas systems, which ultimately led to the explosions, but the volatile nature of natural gas raises questions that remain unanswered.

As awareness grows about the safety concerns of natural gas in the home, electric heating and cooling technology shines for its lack of harmful by-products in the home. Taking into account these health benefits combined with substantial progress in the technology itself, building electrification is becoming a real contender in the energy market.

Because natural gas has long been the standard for heating, implementation of electric heating is a topic that often raises some eyebrows. Some critics argue that conversion to an all-electric system is too costly, yet present-day examples suggest an opportunity for significant savings.

In this study, the Rocky Mountain Institute investigates the replacement of gas furnaces and boilers with electric heating, and finds that it can lead to realistic savings--especially in the correct conditions.

Costs are also reduced for customers in several retrofit scenarios: for customers switching away from propane or heating oil, for gas customers who would otherwise need to replace both a furnace and airconditioner simultaneously, and for customers who bundle rooftop solar with electrification. New homes, as well as those currently lacking natural gas service, also avoid the cost of gas mains, services, and meters not needed in all-electric neighborhoods. (Sherri Billimoria, Leia Guccione, Mike Henchen, Leah Louis-Prescott)

Affordable retrofits, combined with tangible benefits in the construction of new homes, make electrification attractive to home and property owners looking to save on utility prices. Implementation of electrification technology is simple on a small-scale, given the relative freedom of homeowners to modify their houses. However, change on a municipal level is more complex, often due to municipal regulations concerning utilities. In fact, city codes and partnerships with traditional fossil fuel companies are a key barrier in the implementation of electric heating and cooling on a large scale. Yet, certain communities have had success reshaping their municipal codes to accommodate large-scale building electrification. 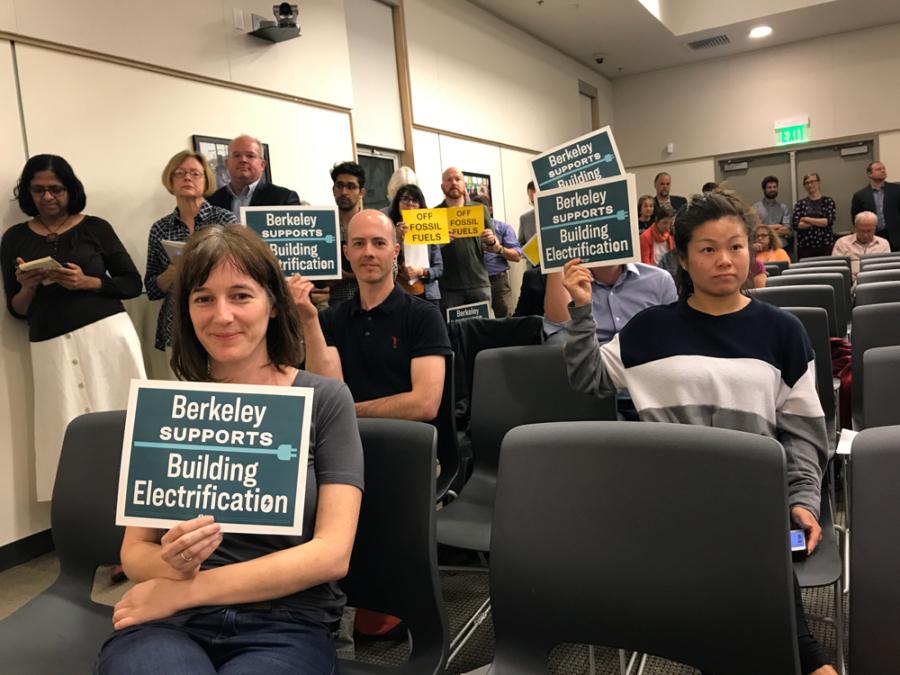 Berkeley, CA recently passed an ordinance banning further construction of houses with connections to gas mains for heating: the first of its kind. This move has piqued the interest of other cities and townships because of its careful implementation. Namely, Berkeley tailored the code to the city’s needs starting with one-story buildings and slowly integrated larger cities into the regulation. City officials also left space for competitively clean and efficient gas connections in new developments, in order to facilitate easy implementation.

As more communities follow suit and establish a precedent for switching to electrification, implementation stands to become a significantly more streamlined process.

Especially in the face of rising natural gas prices, electric heating has real economic worth; in fact, it implies large savings for cities and citizens alike. The below table examines the monthly cost of different heating methods in four different U.S. cities: 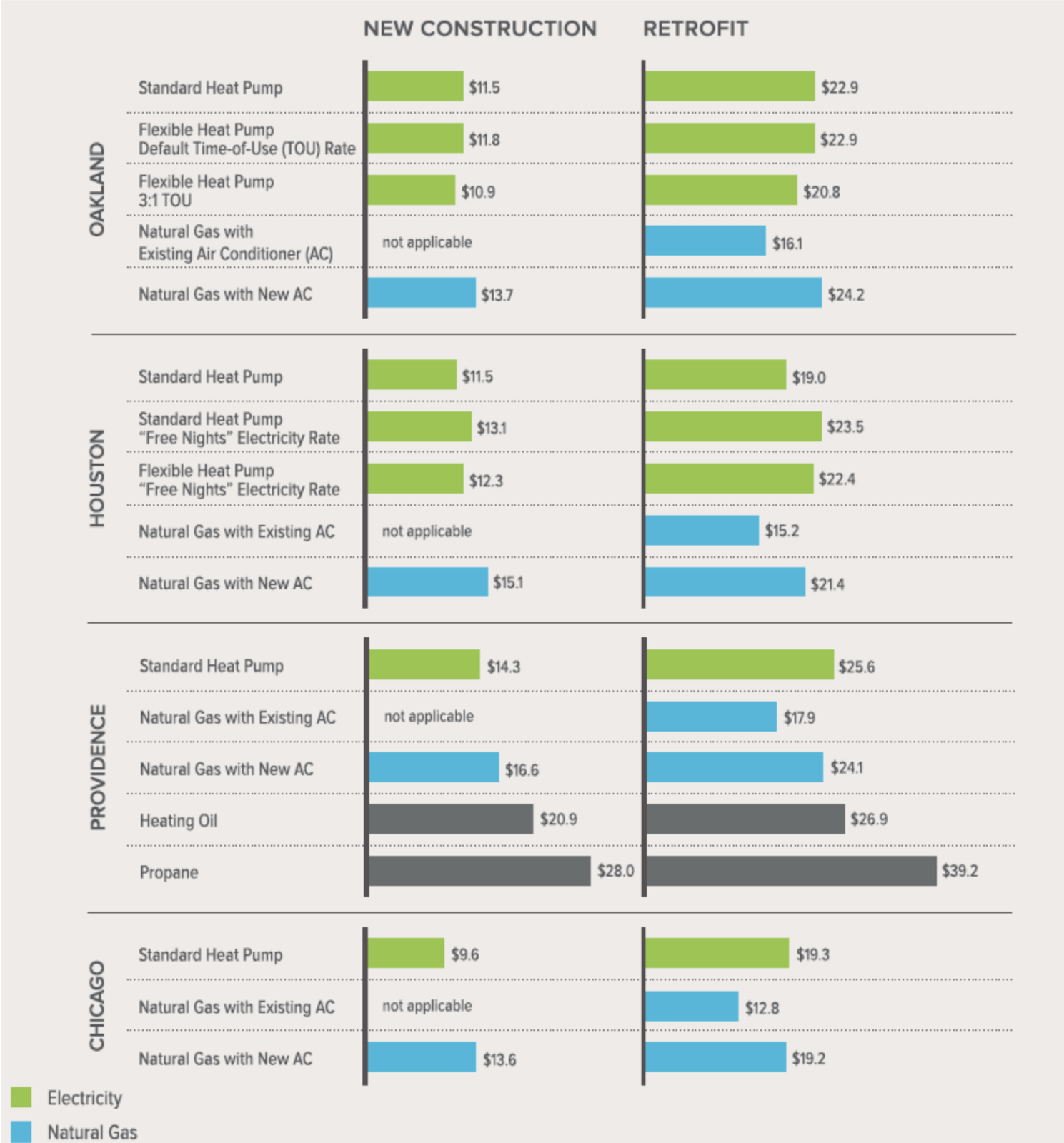 The Economics of Electrifying Buildings

Heat pump technology, and related electric heating technologies, are predicted to become more cost-efficient as time goes on: researchers plotted predictions for heat-pump cost-efficiency (in relatively warm climates) in the chart below:

Given these hopeful predictions for efficiency, it’s clear that building electrification methods show promise for sustained improvement in years to come. The presence of effective and efficient technology, coupled with the potential for streamlined implementation of said technology implies a bright future for electrification.

For further reading , see this detailed report, “Electrification of Buildings and Industry in the United States,”by the Lawrence Berkeley National Laboratory

An interesting piece on electrification by Allison Bailes:
https://www.energyvanguard.com/blog/1-reason-have-all-electric-home

Allison mentions safety with a quote that made me smile: "Your water heater will never kill you with carbon monoxide poisoning in your sleep if it's running on electricity."

But he also uses a series of energy input/output "Sankey" diagrams to show that coal has been decreasing in the US energy mix, from Coal dropped from 51% to 32% between 2008 and 2018. Half of this reduction was due to increasing wind and solar energy increases.

Allison's key point: Electricity production is cleaner, and will keep getting cleaner - and more affordable.