Greensburg Kansas: Setting the Example for Other Cities to go 100% Renewable

In 2007, the small town of Greensburg, Kansas was hit by a devastating tornado, which destroyed most of the town and seriously damaged the rest of it. Desperately in need of reconstruction, the Greensburg community made a bold choice: to rebuild the town with sustainable construction and renewable energy in mind. At the time, Greensburg was the first town to aim for such an initiative. Its goal was to rebuild all city owned buildings bigger than 4,000 square feet according to LEED platinum standards and also to have the town run 100% on renewable energy 100% of the time. Greensburg successfully achieved their green goal, and the strong Kansas wind that originally destroyed their hardy community is now what powers its every street and home. 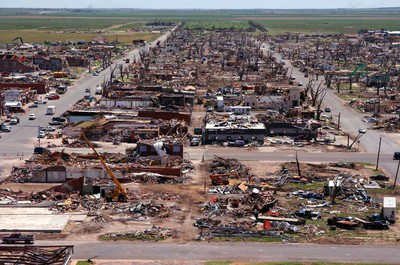 What Does It Mean to Greensburg to Be a Green and Sustainable Community?

To Greensburg, “a truly sustainable community is one that balances the economic, ecological, and social impacts of development.” Being a generally flat and windy area, the town is currently mainly powered by wind turbines both in and right outside of town with the remaining power requirements being fulfilled by solar panels. Together, these power the whole town solely on renewable energy. The Kansas City architectural firm BNIM helped Greensburg rebuild in a sustainable manner. They decided to employ some simple building techniques as opposed to the typical “high performance” building features that may run into obstacles specifically due to overcomplicated design. A north-south orientation along with shading, daylighting, and high performance windows allow buildings to maximize internal lighting via natural light instead of electrical lighting, while minimizing solar gain in the summer. Furthermore, a quality thermal envelope along with ground-source heat pumps enable buildings to achieve their heating and cooling needs in an energy efficient manner. Along with these green initiatives, the community as a whole has agreed to be conscious of their personal energy consumption and reduce it as much as possible to keep Greensburg green moving into the future.

The Effect of this Green Rebuild on the Town’s Economy

With the threat of climate change becoming more clear and sustainable energy and building becoming more competitive, green initiatives are becoming more logical and compelling. However, it is also important to acknowledge some consequences of this green reconstruction. To start with, rebuilding in a sustainable manner reportedly increased the up-front reconstruction cost by 20%. However, this is a cost that should pay itself off, seeing as the new town buildings use 29-75% less energy compared to conventional buildings. A bigger issue is that ten years after the tornado hit, Greensburg is still struggling to attract new residents and businesses. One Greensburg resident, Tom Corns, mentions in an interview that a house recently went up for sale for $120,000. These prices fail to attract residents to Greensburg, because surrounding towns have much cheaper houses to offer. On top of the pricing, these sustainable houses are also selling for less than what they cost to build. As a result, Greensburg struggles to attract companies due to the lack of housing for employees. However, people are not building new places to live, because the town is not generating jobs.

So, was rebuilding Greensburg as a green community worth the trouble, if as a result the community is struggling economically? Some residents seem frustrated with the lack of economic development, but others seem to think that it’s only a matter of time before Greensburg’s economy takes off. The town’s city manager makes the point that Greensburg suffers from the same economic struggles and social ills strangling many small towns so far out from big major cities. So, if Greensburg can just exit this vicious cycle, it should be primed for success.

Greensburg: Just a Step Away from Success

There is no doubt that Greensburg is not currently doing as well post-reconstruction as town planners hoped. However, Mayor Bob Dixson is staying positive, and firmly believes that Greensburg will take off, but just hasn’t yet. His optimism is understandable, but also does not necessarily seem that far-fetched. The town is brand new and built to high environmental standards, and it would seem that Greensburg simply needs an initial impetus to set everything else in motion. This is more than what most other small rural towns, suffering similar economic fates, have to offer. It seems that even a small number of companies, perhaps seeing value in sustainable office space, a sustainable and well-planned community, and an eager population could make a significant difference by locating here. On top of this potential, Greensburg serves as a model for how towns and cities can function 100% on renewable energy. This accomplishment should not be taken lightly, because it paved the way for other towns to do the same. Today in 2017, a total of 4 cities have reached the 100% renewable status, and 6 others are on track to reach it in the near future. Without Greensburg experimenting with the idea of functioning only on renewable energy back in 2007, this notion would probably not be as widespread as it is today.

I am a student at McGill University who is both passionate about sustainability and about spreading knowledge of new green products and services.