7 Smart Buildings Taking Innovation to the Next Level 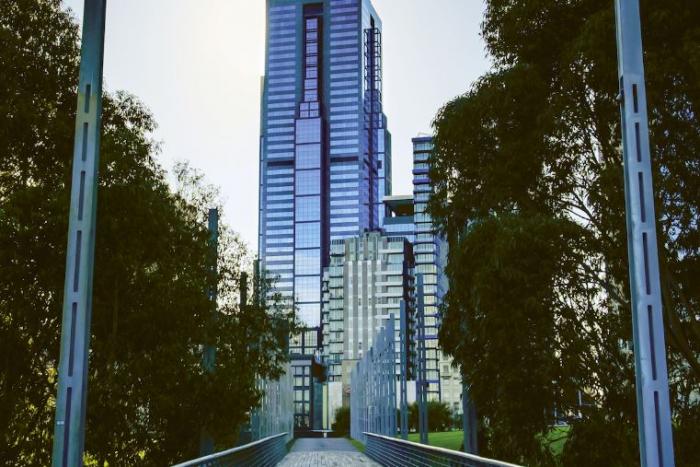 What’s next in the evolution of smart buildings? Everything is pointing toward big data and making greener decisions based on energy analytics.  These smart buildings feature the latest technology to help reduce energy usage and more.

“Smart building technology allows us to operate buildings based on where people are and what their immediate needs are for lighting and HVAC and things like that,” says SVP of Energy and Sustainability Services Darlene Pope, who leads JLL's Smart Building Program. “If [our clients] understand who needs what space when, they can actually reduce their overall real estate footprint by condensing more people into less space, or moving to more of a mobile workforce. It’s all about data-driven business decisions.” 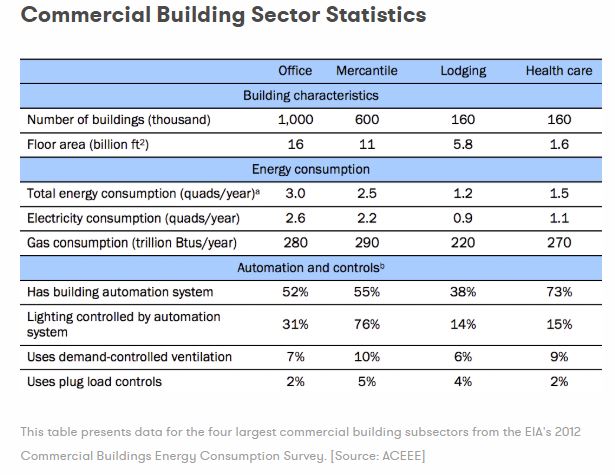 The Department of Energy anticipates commercial building plug and process load usage to jump 49% by 2030, compared with an overall building energy consumption increase of 24%. That’s why smart buildings are more important now than ever. ACEEE’s recent report Smart Buildings: A Deeper Dive into Market Segments takes a closer look at how commercial building sectors can save energy with smart technology.

The report illustrates that smart buildings have the potential to help quantify energy savings and transform the energy efficiency industry. The researchers found that the typical office building can save 18% of its annual energy consumption by incorporating technologies like HVAC controls and LED lighting. Occupancy sensors, for instance, can control HVAC, lighting, and plug loads to reduce energy use when rooms are vacant. 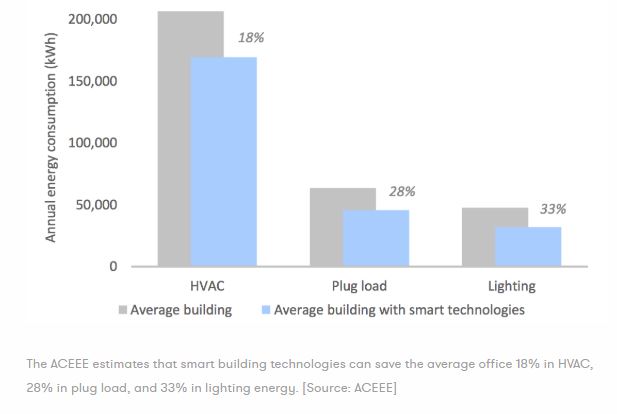 “As opposed to simply replacing light fixtures and putting in more efficient light bulbs, we are also layering advanced lighting control systems that can integrate with things like security and access controls, so the building is operating based on real-time occupancy information, as opposed to anecdotal information, or a time schedule, or people flipping lights on and off manually," Pope says. "All these systems can then communicate with each other through the Internet of Things—the IoT is now the major driver for building operations and building management, and it is creating a much more efficient workplace.” 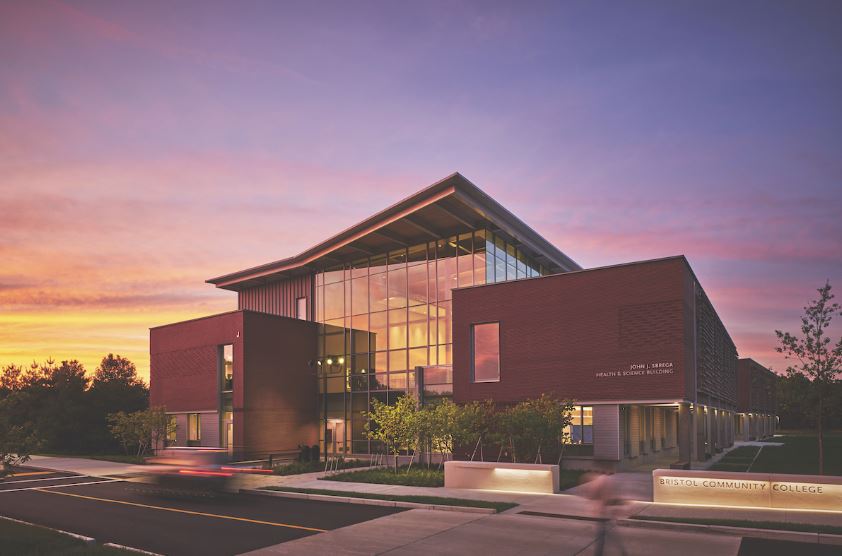 The architecture firm Sasaki designed the John J. Sbrega Health and Science Building at Bristol Community College with energy efficiency as a top priority. Their main goal was to use smart building techniques to create a truly net-zero building—a training facility that would use no more energy per year than the amount of energy it generated onsite.

As a whole, Bristol Community College is aiming to reach carbon neutrality by 2050, utilizing a brand new 3.2-megawatt solar array to provide renewable energy for the entire campus. Sasaki faced the challenge of aligning with the college’s net-zero mission head on by focusing on accommodating the high energy needs for the medical training center, including high plug loads for medical technology and equipment, specialized ventilation, lighting requirements, and generating enough warmth for the cold Massachusetts winters. 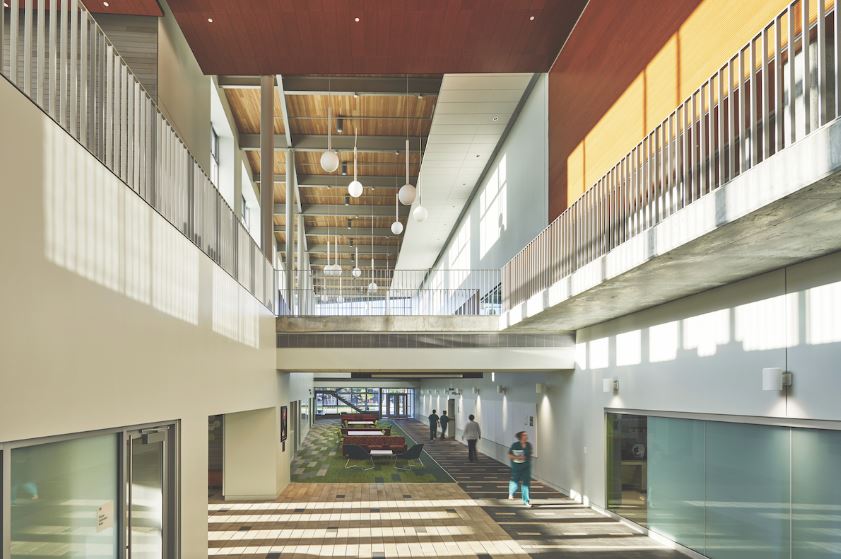 “I’ve had people ask me why the chemistry building is the place to reduce energy, when safety is paramount,” says Thomas Simister, a senior associate at Sasaki. “I would completely agree with that, but also say that unless we push ourselves technologically and behaviorally, we’re not going to make a dent in our energy consumption overall. There are ways to reduce energy smartly, even in science buildings like these.”

The building includes efficient LED lighting, reduced plug loads, enthalpy wheel heat recovery, a hybrid-source heat pump system, and filtered fume hoods that allow the building to take advantage of recirculated and reheated air. Its smart natural ventilation system uses red and green lights that indicate if it is acceptable to open a door or window. Because of these smart energy-saving design aspects, the training facility uses zero fossil fuels for heating and cooling, and it uses less than 20% of the campus-scale photovoltaic system to for its power needs. 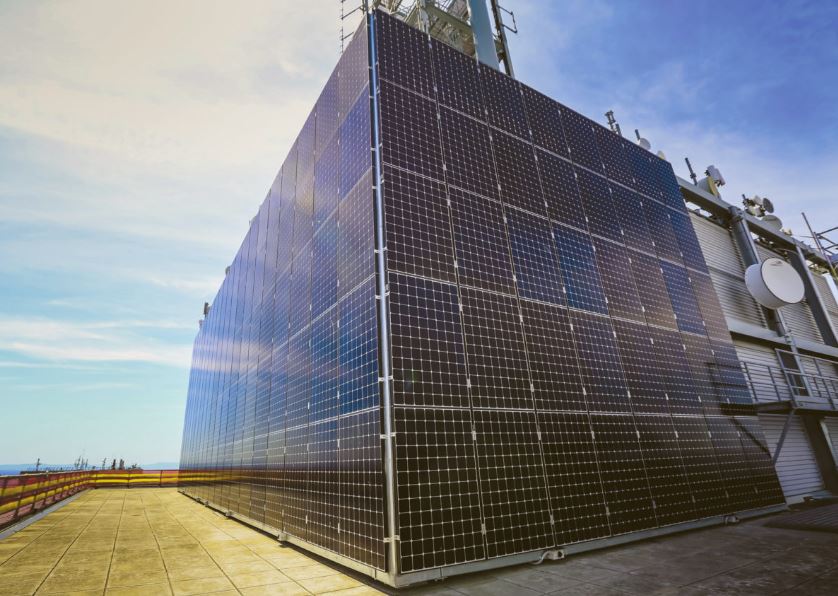 The panels generate 47,000 kWh of electricity per year, or more than the annual amount of electricity used in over 12 houses. This sustainable building also has LED and motion sensor lighting, new high efficiency VSD chillers, an upgraded BMS, and double glazed windows with surface coated tempered glass to increase thermal efficiency. The project is thought to be the highest in the southern hemisphere, as it’s installed on the 56th level of the building. 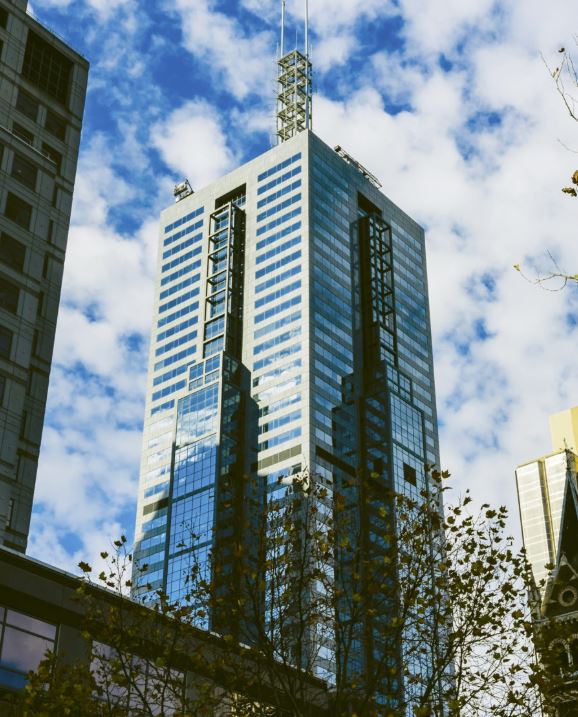 Ross Boreham, senior manager of engineering and sustainability for 101 Collins, says the “set and forget system” of solar was an easy decision, especially as it suited the multi-leveled building in ways that wind power never could. In total, 180 panels were installed, each at 330 watts. And this smart method of generating carbon-free energy is not just a temporary solution. “It will operate for well over 25 years with little or nil maintenance,” Boreham says. 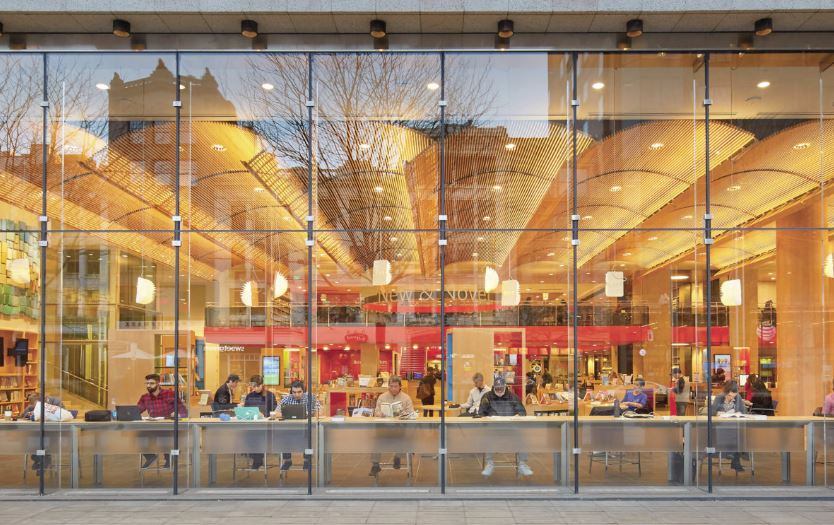 The scalloped ceiling in Boylston Hall serves as an acoustically permeable screen to absorptive material above. Its scalloped shape also plays off the indirect lighting to give the ceiling a sense of movement. [Photo: Bruce T. Martin Photography]

Completed in July 2016, Boston Public Library’s smart building renovations completely changed the feel of the space—and made the building more sustainable, too. William Rawn Associates strived to connect the public building with the community. The interior space flows right into the new public plaza, featuring Wi-Fi and plenty of outdoor seating for studying, reading, or socializing.

“This project creates a new civic idea for public libraries—with a heightened sense of being open, welcoming, and seamlessly connected to the city streets,” says Cliff Gayley, principal architect on the project. The new space features a lecture hall, a business library and innovation center, an updated children’s library and teen area, a high-tech community learning center, and more. 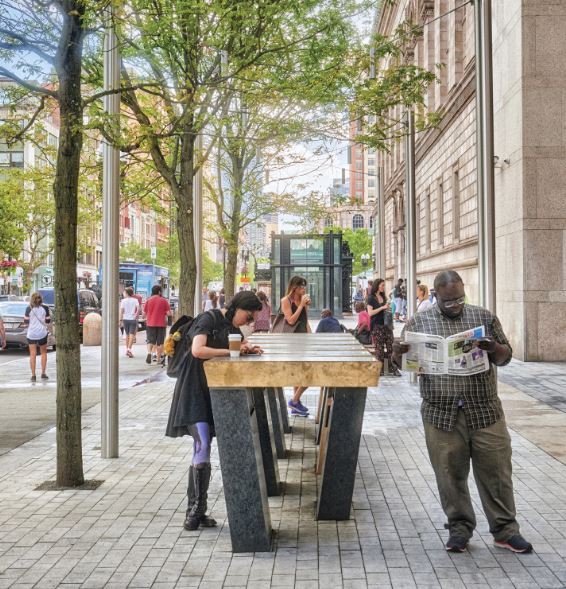 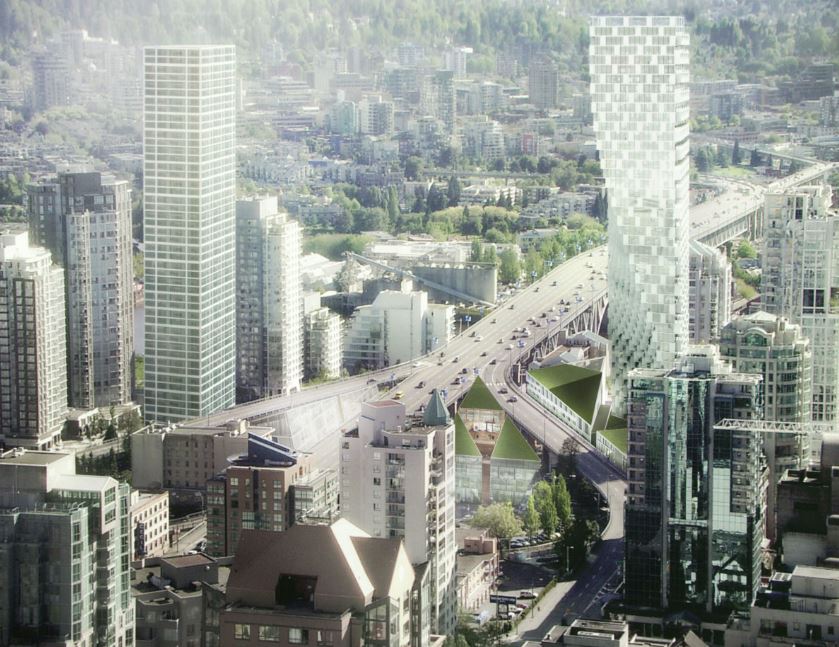 The Vancouver House will incorporate a range of smart building technologies. Bjarke Ingels Group (BIG) in collaboration with DIALOG designed this ambitious project to be one of the most technologically advanced high-rise residential buildings in the world. Projected to be finished in 2019, this 52-story structure will save big on energy with highly efficient LED lighting, occupancy sensors, daylighting controls, and radiant ceiling heating and cooling.

Reclaiming a site beneath the busy Granville bridge, Vancouver House will be an animated urban village, with mixed-use spaces that overlook the public plazas and paths. The tower will be 80% residential, 10% workspaces, and 10% retail. “This is not just a building, but the start of a new neighborhood,” says BIG Partner Thomas Christoffersen, adding that the three buildings that make up Vancouver House, along with the Granville bridge, combine to form a lively district, perfect for a variety of events. 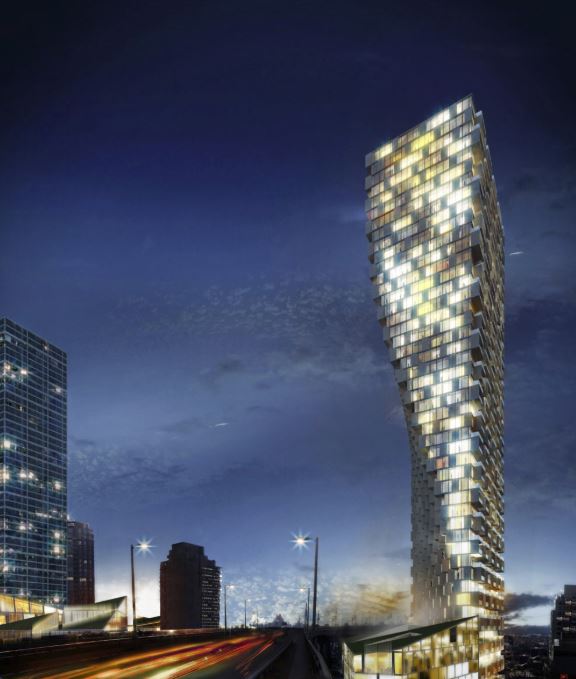 Water management played a leading role in the design, too. Rainwater will be used for irrigation through an efficient rainwater harvesting system. The team is also creating a water resource management plan for green roofs and permeable spaces to lessen stormwater runoff.

The building’s mechanical systems prioritize indoor air quality for occupants, using 100% fresh and UV-treated and carbon-filtered outdoor air, with no need for recirculation. The water will be fresh as well—all domestic water will be filtered through a reverse-osmosis system. The highly flexible and efficient hydronic heating and cooling system will also keep inhabitants comfortable while saving energy. 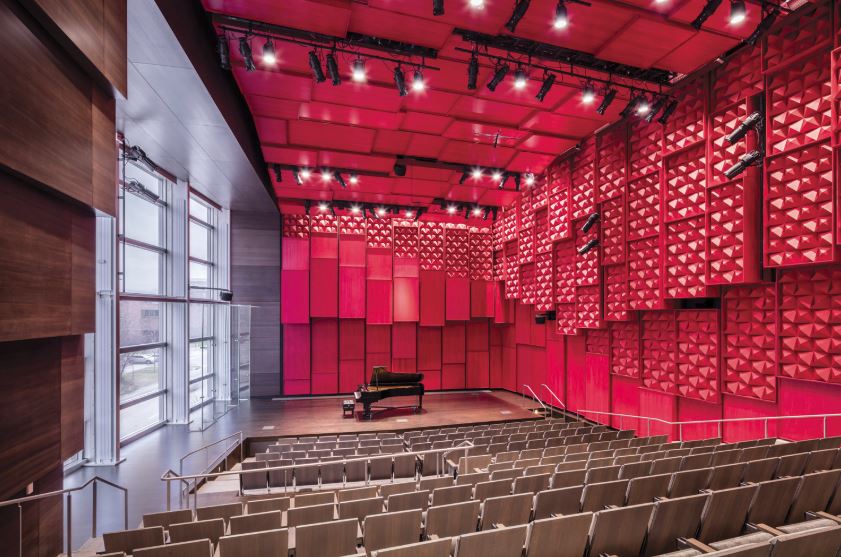 Smart buildings require planning ahead. That’s why LMN Architectsincorporated energy modeling from the start for the Voxman Music Building at the University of Iowa, which opened in 2016. This campus building needed to keep energy costs low and meet specific temperature and humidity requirements to protect sound equipment and musical instruments. To achieve this, LMN partnered with Neumann Monson to apply energy modeling techniques in the design process, including daylight modeling, HVAC analysis, and energy massing analysis.

“Without energy modeling, we would not have gotten the financial incentives, and we probably wouldn’t have considered some of the more innovative solutions that were ultimately used,” says Kjell Anderson, sustainability coordinator at LMN Architects. “The modeling helps to prove energy savings and guide decisions.” 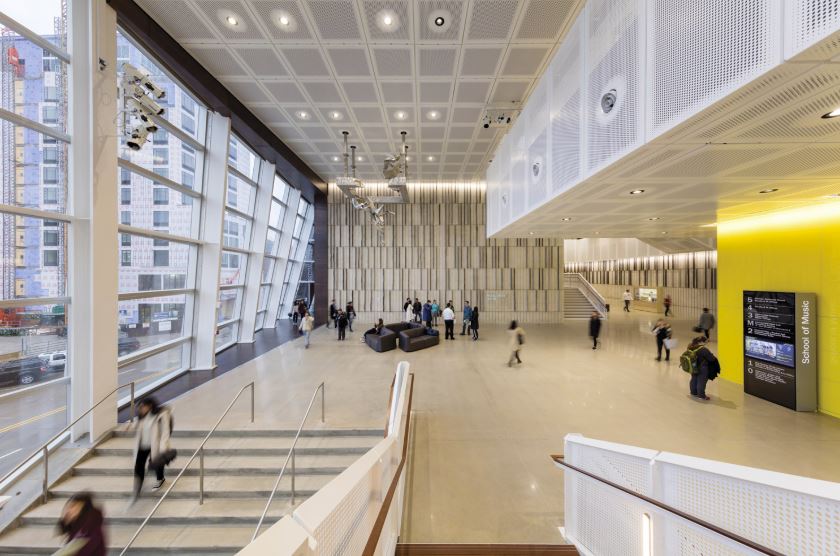 Overall, the mechanical and design adjustments from energy modeling led to a 70% decrease in energy costs. Energy modeling enabled the team to think of inventive solutions and make significant green design decisions, like the ultra efficient heat recovery chiller system and the high-performance building envelope.

The LEED Gold–certified music building features smart building techniques like active daylighting controls to maximize comfort and cut back on energy use throughout the building. LMN also researched acoustics and material science, using digital fabrication and parametric modeling to optimize the geometry of their design and test acoustical systems for quality. 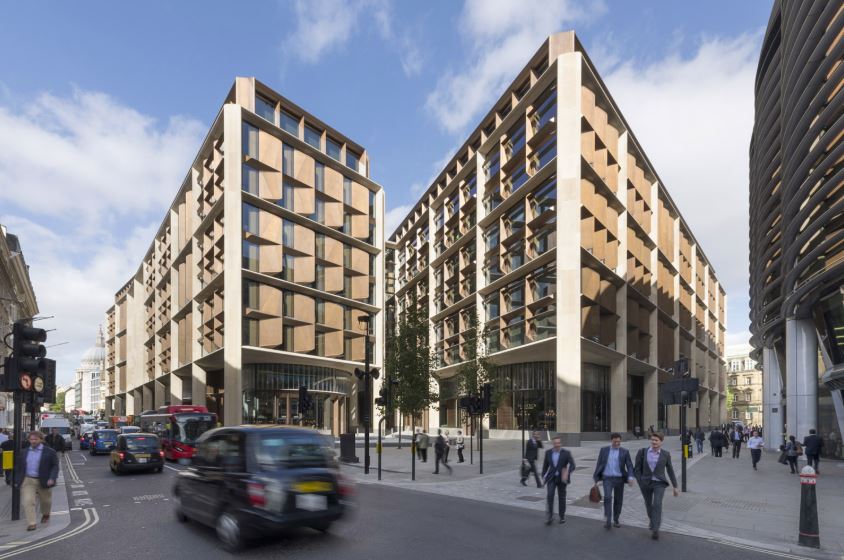 Bloomberg’s European headquarters embodies smart design in every way. Completed in October 2017, the building achieved an incredibly high BREEAM rating of 98.5%. Its integrated cooling system is the first of its kind. The system combines the high heat-transfer efficiency of aluminum ceiling tiles with a chilled water coil beneath the tiles to reduce energy use.

“The tiles are a pivotal part of the design and really pushed the boundaries of existing thinking,” says Michael Jones, senior partner at Foster+Partners and the project architect. The petal-leaf tiles also help reflect light from the building’s 500,000 LED light fixtures. These LED lights utilize 40% less energy than a conventional fluorescent light system. 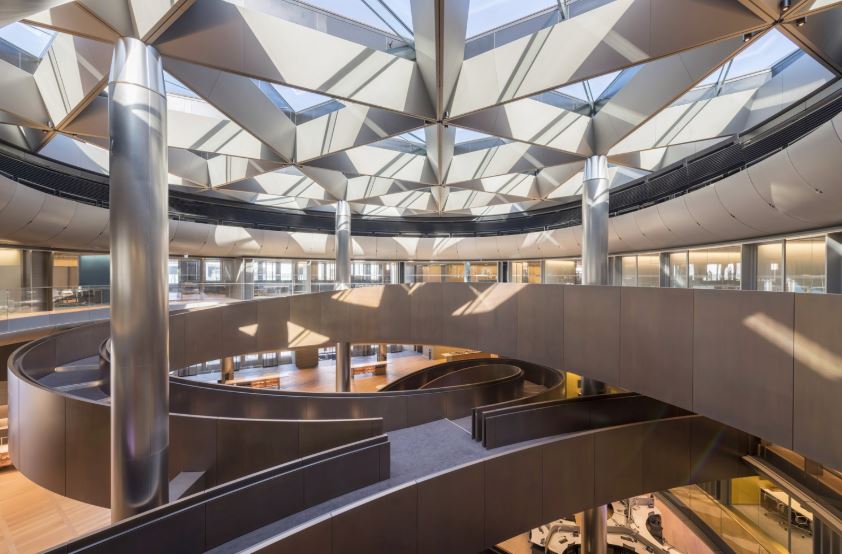 In addition, an on-site combined heat and power (CHP) generator cuts back energy usage by 35%, transforming natural gas to usable power and reusing heat that would have been wasted otherwise. Photovoltaic cells on the roof convert light energy into electricity to supply supplementary power to the 10-story facility—enough energy to power eight homes. Smart controls adjust the airflow based on carbon dioxide levels and occupancy throughout the building. On the average floor, there are about 775 workstations and 68 carbon dioxide-detecting sensors.

The Bloomberg office also uses about 73% less water than the average workplace facility. It has a net-zero flushing system that uses treated and recycled collected rainwater from the roof, basins, showers, and cooling tower blow-off. The toilets also use 0.6 to 0.8 liters of water, which is much less than the standard 5 liters that a typical toilet uses. 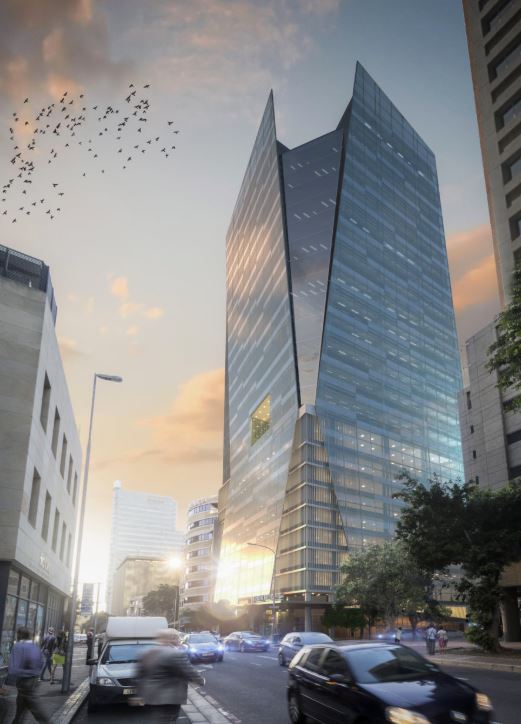 “The team identified the usual water and electrical saving devices such as energy-efficient devices and low-flow taps and then went further to identify the air-conditioning and lifts where the greatest water and electrical saving can be made,” Cresswell says. The team developed the innovative sky lobby, which is a jockey lift system that can be used alongside the smart lifts. Abland also implemented a cutting-edge, air-conditioning system that saves water.

“The greatest saving on the air-conditioning was achieved by reducing heat buildup in the building,” Cresswell says. “This was done by facing the building away from the harsh summer sun, changing the color and quality of the glass, as well as using a combination of double glazing and high-tech blinds.” The new building is located in a prime spot for both public transportation and bicycle lanes. Also, the addition of bicycle storage space, showers, and lockers will inspire tenants use these greener ways of commuting.

Green Building & Design (gb&d) is a trade magazine that connects and inspires green building professionals by partnering with those at the forefront of sustainable design. Our print magazine and dynamic online edition offer a global perspective on new projects and products created with sustainability and social responsibility in mind.